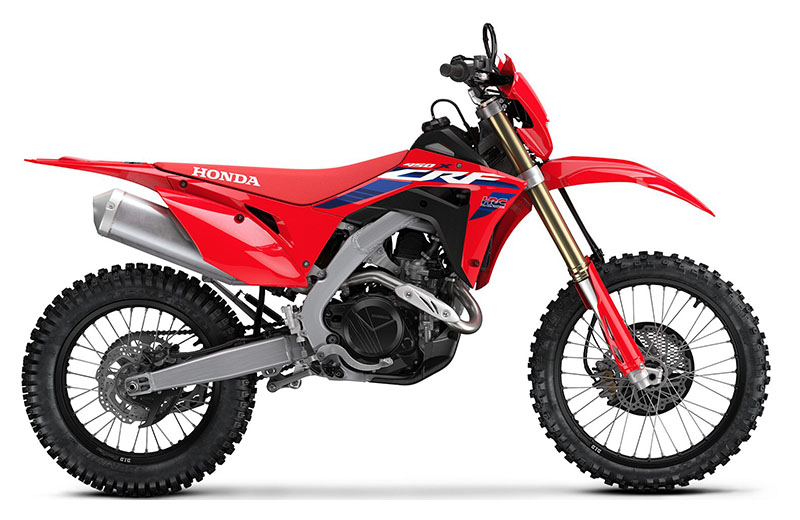 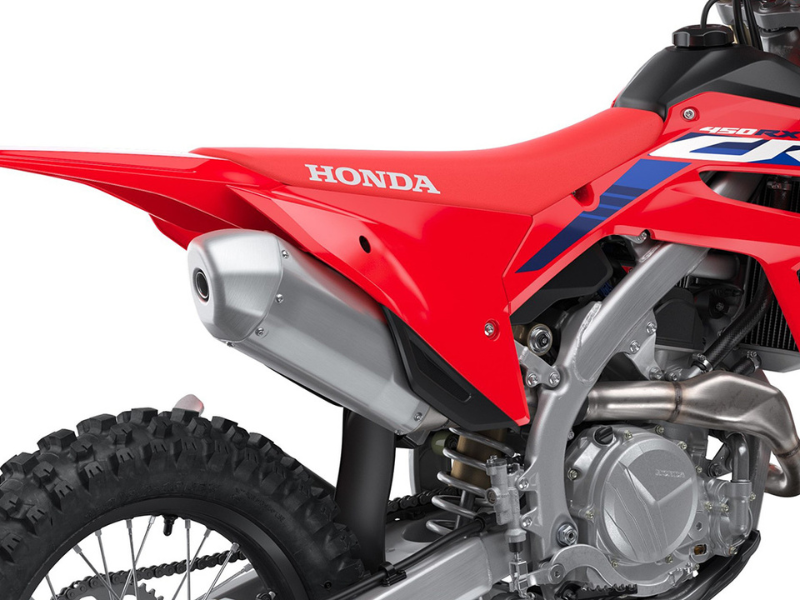 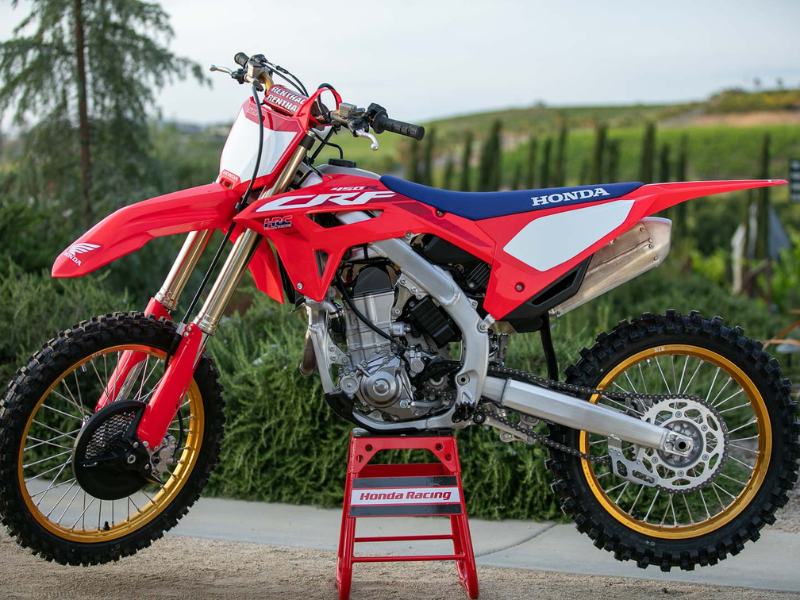 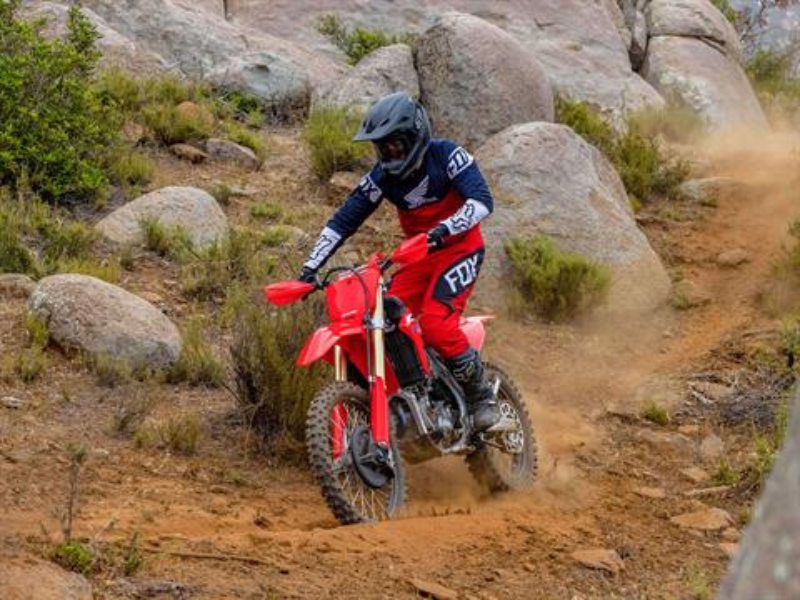 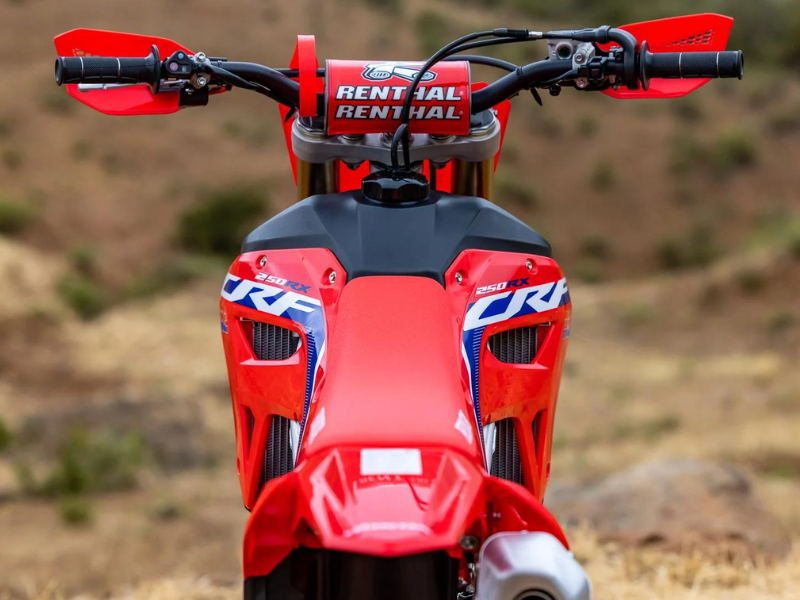 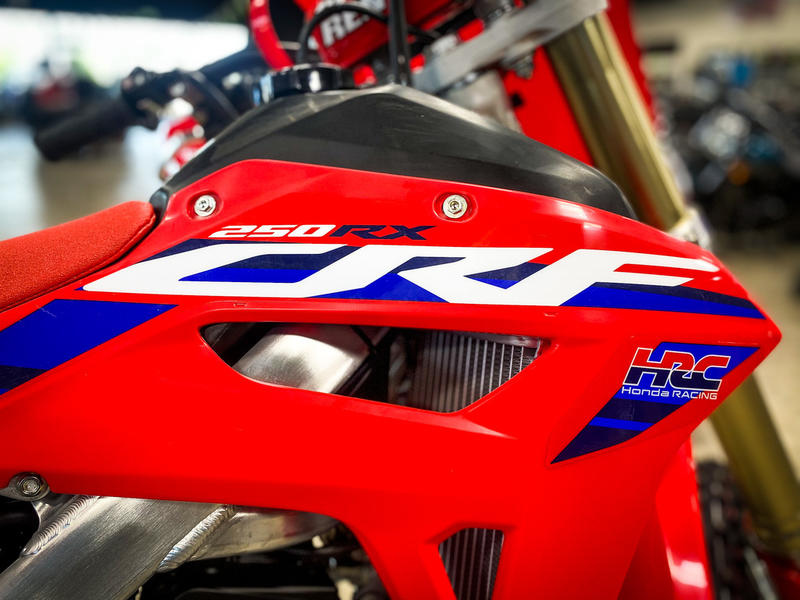 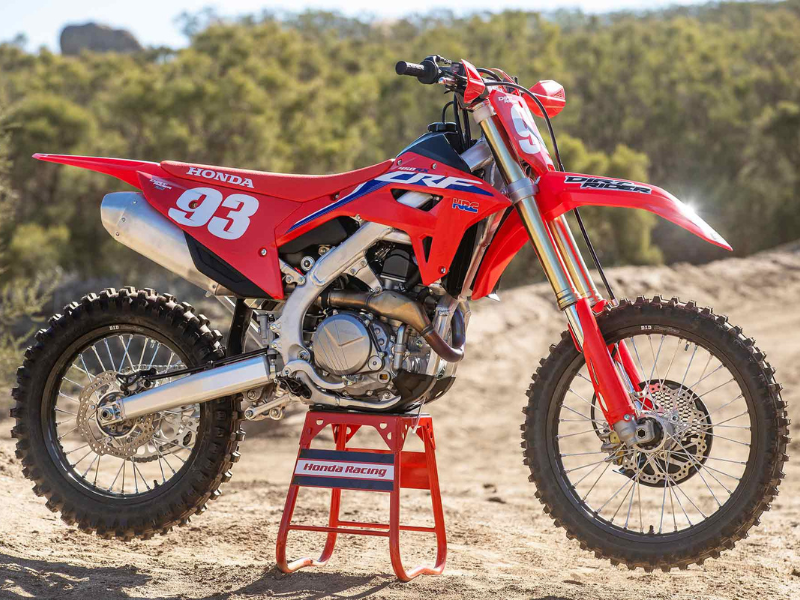 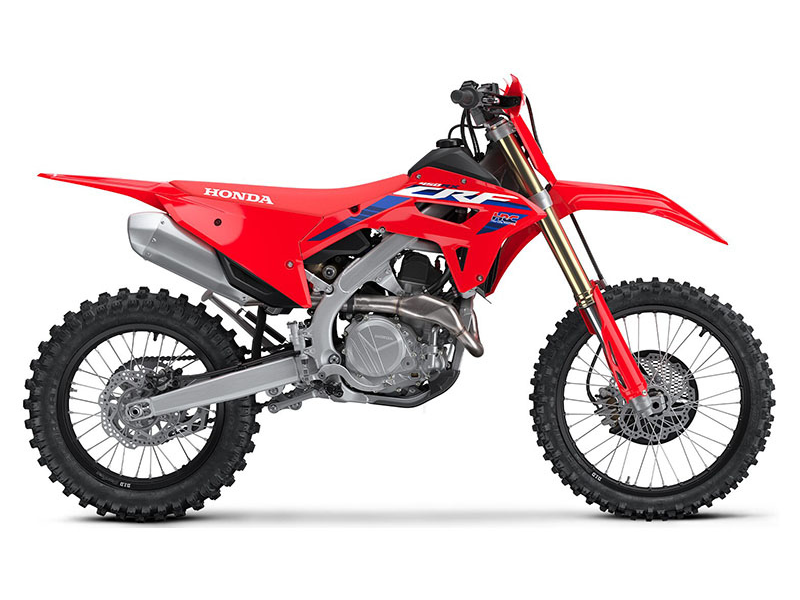 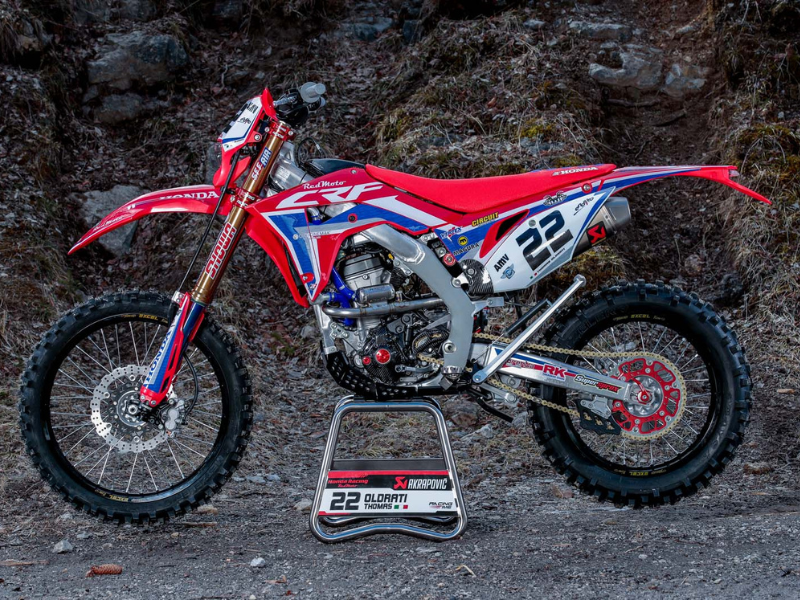 The Honda CRF motorcycle series is one of the most popular and recognizable motorcycle lineups among riders. The CRF line was launched in 2000 as a replacement to the CR series and now 20+ years later includes four-stroke motocross, trail, and dual sport motorcycles.

There are so many motorcycles within the CRF lineup, it’s important to understand the naming conventions so that you can find the right one for you.

In the dirtbike world, it’s widely accepted that ‘F’ means the bike has a four-stroke engine.

These last two are the most important factors when finding the perfect Honda CRF for you.

Finally, the last letter is going to tell you what the bike is built for.

Once you know what type of riding you’ll be doing and know your desired power output, it will be super simple to select the right Honda CRF for you.

In order to break down these bikes as much as possible, we will be discussing only the “RX” series on this page. To look at any of the other CRF motorcycle series click here. CRF F, CRF R, CRF L.

Race ready out of the crate

Is the Honda CRF RX a Good Motorcycle?

Honda is known for producing reliable and competitive motorcycles. The “RX” series is no different and features some of the best Enduro-style motorcycles on the market. The RX lineup comprises only two bikes, the CRF250RX and the CRF450RX. The motorcycles were based on their CRF “R” series siblings and were tweaked to be optimized for hare scramble, hard enduro, GNCC style racing. You’ll find an electric start, a large fuel tank, and 18-inch wheels to be standard on these bikes. The XR fills the gap between an overly aggressive X-model and the closed-course race-style R model. If you’re in the market for an off-road racing motorcycle, Honda is an excellent choice.

How Much Power Does The Honda CRF RX Have?

Which Honda CRF RX Model Is Right for Me?

Aesthetically the “RX” series look very similar to the “R” motocross series, but underneath all the heavy graphics the motorcycles are completely different machines. The “RX” series blends super lightweight with explosive power, giving it an ideal ratio for an enduro motorcycle. At the time of writing this, the 2023 CRF lineup is the most current, so we will be discussing those models.

CRF250RX - The 2023 250RX remains mechanically unchanged from the 2022 version, the only changes are the bike's new graphics which include a redesigned HRC logo. With that said, the bike didn’t really need any new mechanical updates because in ‘22 the bike got a complete overhaul. The bike has the same lightweight chassis as the 450RX as well as cylinder head development. Cooling efficiency has been improved and the gearbox was strengthened with revised ratios and a nine-plate clutch. The 250RX is essentially the competition off-road version of the 250R motocrosser. The 250RX has all the features of a usual off-road bike making it ideal for the trails. Don’t get it twisted, this is a true race bike. It comes out of the crate with all the pivotal modifications to make it a powerful off-road racing champ.

CRF450RX - Updates to the 450RX have been put in place to make the motorcycle faster for longer. Some changes include a factory rider chassis setup, engine changes allowing for low-rpm torque with smoother power delivery, a more durable rear muffler, intake ports, air funnel, throttle body, Showa forks and shocks, and just like the RX250 mentioned above brand new HRC logo and graphics. Although built in a similar vein, the CRF450XR can tackle a much wider variety of terrain than its MX sibling the CRF450R.

How Much Does the Honda CRF RX Cost?

Honda CRF RX  vs. the Competition

The Honda CRF250RX and the YX250FX are off-road racing bikes, both of which are very similar to the MX version from each of their manufacturers. The Yamaha YZ250FX would have blown the Honda CRF250RX out of the water before, but because of the major overhaul that Honda did in 2022, the race for the best bike is tight between these two.

Both bikes have comparable power and torque, but Yamaha stands out when it comes to the on-the-fly mapping switch. Yamaha has an app that you can connect with tons of cool features, and Honda falls short due to how difficult it actually is to switch when you’re on the go. As far as suspension goes, the Yamaha favors comfort over performance offering a softer ride, while the Honda has a much stiffer feeling. We feel pretty neutral about this, so it’s at the rider's discretion to decide which they prefer.

When it comes to handling Honda is the big winner, the CRF250RX is much easier to maneuver and has the best cornering chassis in its class. Another thing to consider is that the Yamaha YZ250FX has a pretty small and cramped rider cockpit, which actually makes it a favorite among smaller riders. Compared to the Honda CRF250RX which is easy to adjust and has lots of space for the rider.

Lastly, let me rattle off some common remarks among the riding community. The Yamaha is harder to start, features some of the worst breaks in its class, and comes standard with a well-liked skid plate. The Honda’s brakes are fairly touchy and powerful which seems to be well received, the skidplate is not great, but the bike includes a stock set of handguards which riders appreciate. MSRP for the YX250FX is only $300 more than the CRF250RX, so making a decision between the two is really going to come down to what features you as a rider value the most.

The Honda CRF450RX and the Kawasaki KX450X are two of the most popular off-road/cross-country racers. Despite being produced for the same segment, the bikes have different strengths and weaknesses depending on which way you lean. Unlike the two motorcycles we discussed above where you could make a decision by a coin flip and still be satisfied, there probably is a right answer for what to purchase between the CRF450RX and the KX450X.

Although it’s not an MX bike, the Kawasaki KX450X leans more toward motocross than its Honda adversary. The bike is equipped with the same engine tuning as its MX sibling and comes out of the crate with an 18-inch rear wheel, skid plate, kickstand, and lighter spring rates and valving. A few features we’d like to see on future upgrades are a larger fuel tank, on-the-fly map switching, handguards, and an O-ring chain. The consensus is that Kawasaki feels at home when you’re speeding on an off-road closed course or moto track, but shows signs of weakness when you want to take it for a trail ride.

The Honda CRF450RX is a tried and true off-road-friendly bike and has all the versatility that the Kawasaki lacks. Like we’ve said throughout this article, the CRF450RX is a beast on the trails, but that doesn’t mean it’s not ready to race at a moment's notice.

With that said, both are great bikes with only a $100 discrepancy between them. Choose the motorcycles that is most compatible with your riding style and needs.

What Does Maintenance Look Like For The Honda CRF RX?

The CRF RX are trail racing motorcycles, so taking frequent proper care of them is important in order to have peak performance. This means oil changes every 15 hours or 4 races, lubricating the mechanics every 3.5 hours or 1 race, and taking your bike into the shop yearly for part replacements. Check out the CRF RX’s maintenance schedule for full details, because taking care of your bike isn’t a task to take lightly.

What After Market Parts Can You Add To The Honda CRF RX ?

Many of the motorcycles in the CRF lineup feature Special Editions of the bike that we did not include in this breakdown, so if you’re interested in a Honda CRF but don’t want a basic stock version, take a look at the Special Edition models.

As for aftermarket parts, there are plenty of ways to make your new Honda CRF your own. Exhaust systems, clutch covers, and coolant hoses seem to be among the most common aftermarket upgrades.